I thought I would make myself some almond milk to "check it out".  That first step became my obsession for the next few months with every morning starting out with an almond milk smoothie or iced coffee!  Oh Bliss!!

I have been making rice milk since I got the thermomix - saving me a FORTUNE!!  But as the Almond milk was in the Thermomix calendar this year I thought I'd give it a go.

First of all - it is better than rice milk.  Richer, Creamier, Tastier and even Better for you I found.

Secondly - While it is much cheaper than buying it, it is considerably more expensive than rice milk per litre ($2.50 compared to 20c!)

Thirdly - it is more time consuming to make than rice milk.  It is the same timewise - soak overnight and then blitz, but then you have to SQUEEZE the milk out of the almond milk wheras the rice milk is just there!

Is it worth it!  Yes, it is absolutely delicious!  just wonderful!

I tried a few different ways to make the squeezing easier, or at least quicker.  The best I found, is to strain the liquid first through a fine metal strainer.  I let that sit for a few minutes and let it drain itself.  It is the stuff left in the strainer that I then put into a nut bag and squeeze.  Much quicker and better for your muscles (although you'll develop them in short shrift!) than squeezing from scratch.

It is a shame to through out the almond pulp.  I have tried to put it into bread but it made it a bit dry.  I guess if you added a little more liquid?  It would be good fibre! 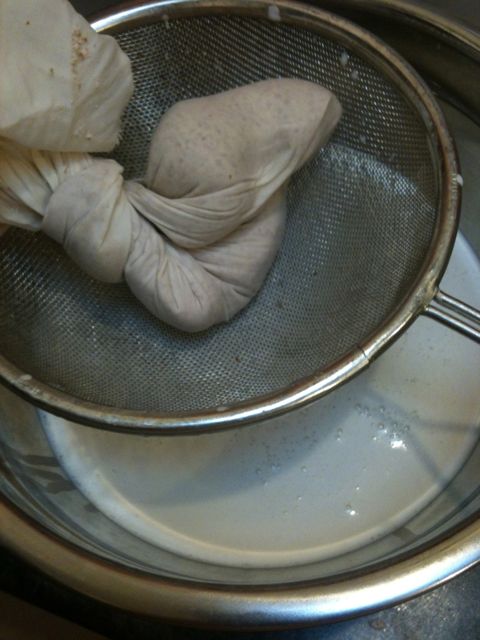