What can I say?

Super easy... (a little messy tho, LOL) and the taste is actually better than ANY truffles I have ever eaten!  And... just to prove it is the packaging that makes chocky look more expensive.... by the time I put the (few remaining) truffles into small packages, they looked a million dollars!

"Okay, it is ok to LOOK a million dollars, but what about the cost?" I hear you ask (I'll wait while you ask.....).  Well, a little cream, about a kilo of chocolate, a little honey and a vanilla bean.  What they cost you depends on what chocolate you get!  I, ashamedly so, used bulk cooking chocolate buttons (which I buy at $9 a kilo) and a block of Energy chocolate for the truffles themselves, and just the buttons for the topping chocolate.  AND I buy my vanilla beans in bulk from ebay and they work out at 80c each for me.

So.... the batch cost me $12 including the slivered almonds for the topping.  I made only 65 rather than the 100 the book recommends, but even then - each truffle cost me only 20c each!

LESSON: I was USELESS at rolling the balls at even sizes - oh dear!  My next batch (and there is going to be MANY more), I think I will cut the block of cooled truffle into even-ish squares with a knife and THEN roll into balls

LESSON: I would have loved to use a melon baller, but I din't have one, and that was a bonus really - they would have been too big.  These truffles are quite rich and a smaller ball is best (especially seeing you are going to cover with choc as well!!)

LESSON: the book suggests that rolling out the balls with wet hands would be easier.  I worried aobut that at first because... isn't it a bad thing to have water and Chocolate??  But, after the first 10 blodgy balls - most of them left on my hands - I tried it.  Sure worked!  Not soggy wet, but damp.  The water also stops your hands from getting too warm

HINT: in fact - have a bowl of iced water near you for frequent dipping of hands

BIG LESSON:  One learnt by me mostly.... I suck at dipping chocolates!!  WAY too time consuming and I could NOT get a nice even coating without the hole, of the skewer I was using, showing.  So.... I just put the choc into a piping bag and piped the choc on in squiggles.  it was WAY quicker and took heaps less choc (I only used 200g for the coating rather than the 500g asked for) 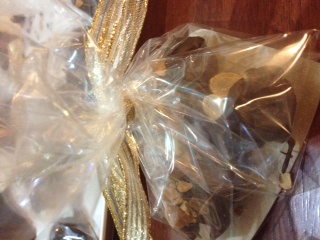