What is Frangipane? I had no idea, I thought they spelt frangipani wrong LOL. According to an on-line dictionary, it means..

The noun FRANGIPANE has 1 sense:

1. pastry with a creamy almond-flavored filling

So.... if you are allergic to nuts this isn't going to be your favourite recipe (although I wonder if you can make the same thing with custard filling? Probably! so read on anyway)

Anyway, I received a post from the British Larder the other day and the picture of this delicious little tart was just too mouthwatering to ignore! And let me tell you... it was as delicious as it seems - and quite easy really.

Do you have raspberry jam? If not, make some. Easy with Thermy - some fresh (or frozen) raspberries, some sugar and a little lemon juice. Use your EDC (Everyday Cookbook) jam recipes as a guide. So.... this isn't the quickest dessert - but it didn't take that long really and as they say in the blog... you can make them the day before.

1: grind the sugar and then Almonds while the bowl is squeaky clean - set each aside separately, but no need to clean the bowl

2: Make the pastry. I used the British Larder sweet pastry recipe - delicious - but I used the TMX short pastry method.

slow speed to 5 and add one egg and then start pouring in some COLD water - pour in steadily until the dough JUST starts to form a ball.

NOTE: Pour it in too slowly and it doesn't work as well as the dough will just start forming a batter at the bottom, so don't be too cautious. (not a problem if you have that happen - add a couple of tablespoons of flour - mix with spatula a bit and then mix on speed 5 again).

Knead on Interval Speed (the button with the wheat symbol) for 30 seconds.

Take dough out and cover with plastic (or put into a floured plastic bag) and pop in the fridge for a while to "rest".

I don't know the technical reason why dough needs to "rest" - maybe it's tired after the kneading.... but one thins is certain - the fridge chills the butter a bit and makes it easier to handle later.

LESSON: *why on earth did I put a second lot of numbers above? Why not make a large lot of pastry - you'll only need half and then you can freeze the rest for a quick start another time!

3: So... with the scraped clean bowl (no need to wash) - start the filling

Here the recipe asks for 1 tsp of almond extract... I didn't use it and didn't miss it! IF you are using, add and mix for 20 seconds on 3 also.

take the butterfly out and take as much as possible out off it before setting aside.

mix on speed 1 until just combined.

Careful when taking out the mixture to fill the tarts - you do NOT want to be putting a metal spoon or knife into your bowl, it'll scrape the bowl and the blades. Take out or use your spatula or a silicon one.

4: Putting together the tarts

Roll out the pastry (3mm-ish) and line some tart tins.

LESSON: Doesn't that sound pretty and OH SO chef like!! "line some tart tins" Well.... I didn't HAVE tart tins! I guess you can make one large tart... but be careful with the cooking, AND make sure it isn't too "filled" - a thick filling will definitely not cook. I quite happily used a large muffin tin BUT..... one thing to note, is that I made 1/6th of the filling intending to only make two tarts (but it made 6 little ones)

divide the frangipane mixture between the tarts (careful - not too thick... as I said, 1/6th made 6 little ones for me)

add some fresh raspberries for decoration

Here the recipe said to let the tartlets chill in the fridge for another 30 minutes.... I'm sure that there is a cheffy reason for this, but mine went straight into the oven.

LESSON: the original blog has a lovely sounding honey syrup glaze for the top and some fab sounding rasp/honey icecream - I didn't try tthem, I might do that next time.

HINT: I wonder how this would go with strawberries!  Or apricots?  Or any fruit really - even oranges with marmalade for the jam and curly bits of orange rind for decoration

LESSON: What if there is just one or two or you... what if you aren't going to feed an army, you just want a nice desert and don't want to be eating it for months on end? I reduced the recipe to 1/2, 1/3 and 1/6th below. As I said above - I made only 1/6th and it made 6 little tartlets (but I made the 500g version of the dough and froze the left overs in 2 lots ready for my next creations)

Here is a cut down version for both the tarts and the icecream recipes in case you don't want to cook for a large dinner party or cafe.  NOTE: I obviously used a spreadsheet to cut down the numbers and it might be hard to measure "17 grams of flour" - but use it as a guide eg: I used 20g of flour 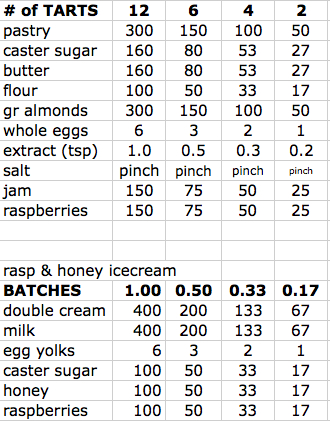