We had some Beef Strog left - enough for one large serve, or two small ones.

I minced a few slices of bacon on 6 for a few seconds and then added a heaped teaspoon of corn flour and the leftover Beef Strog.  Again Speed 6, about 10-15 seconds.

I had already made one lot of shortcrust pastry and had rolled it out and cut out 8cm circles.  They weren't big enough really, but as the dough was a bit thick, I just squished them into the trays (Muffin pans with a little baking paper in them... anything to not have to clean up too much)

I then put a little of the meat mixture into each of the pastry cups - they didn't take much - I had to make another lot of pastry!  considering that I only had maybe a cup to a cup and a quarter of meat - it stretched to 24 muffin sized little pies.

Lets take the left over meat/filling as free (already factored into the meal it came from - seriously, 24 pies took hardly anything)

HINT: would be fabo with a little left over taco mix filling! 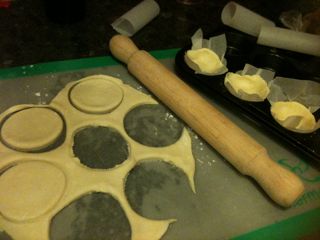 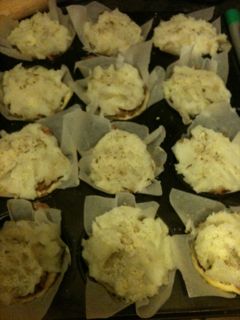