Have you been seeing photos like the one below, all around the thermo-cyber-space?  On websites and your TV?
That's because they're an intriguing recipe and, lets face it, one of the easier things, in the fantastic In The Mix 2, to make
I have made them 3 times now... all in the name of research!!!... and I must say that I have a relatively pertinent hint to give you when you are making these, as well a great alternative/addition.
First of all.... the recipe is easy - it doesn't necessarily use the cheapest of ingreidents AND whoooo eee!  There's quite a bit of sugar in them thar bikkies!!!  But they ARE easy and they taste amazing.  Surprisingly, they don't TASTE sweet and although they should be rich... they aren't really, but you can't have more than a couple.
If you haven't tried them yet, may I make a suggestion??

Everything works well until you add the flour and the cocoa.. the Thermomix REALLY struggles!  The mixture is THICK and you can just hear the thermomix struggling!!  I have tried stirring with the spatula and halving the mixture and doing it 1/2 at a time.... Forget actually adding the last lot of choc chips and stirring them in!
I even tried adding an extra egg at the egg stage... I have tried warming the glucose syrup until it is more runny (which did work better).... but basically there is a problem with the recipe having just toooooo much dry mix to mix into the wet one.
I would recommend you cut down the cocoa from the 160g  to 100g, or cut 60g out of the flour.  THEN it works ok.  Cut even more of the cocoa out (I used 60g) and it workes even better!  STILL thick, but not "about to break your thermomix" thick.   160g is a LOT of cocoa and really... I don't think it needs THAT much!  Mind you... I am NOT a chef!!!!

Can you make them even better?????

I have (just) tried adding peanut butter instead of glucose syrup.  My peanut butter is quite soft as I add a bit of oil to make it soft (gotta make it how john likes it so he eats it!!).
I swapped gram for gram (100g) and it added a very light peanutty flavour to the bikkies.  Perhaps in the next batch I might replace the first lot of chocolate AND the glucose syrup with the peanut butter.  OBVIOUSLY don't feed to people who are allergic to nuts!!
The texture is stilghtly different... not quite as fudgy as the original recipe with the glucose syrup.

For the love of your blades... do NOT scoop your bikkies out of the TM bowl with a metal spoon!!!!  I always tip bikkie or chocolate mixtures into another bowl (NOT a TM one) and scoop out from there.  The best thing I have ever bought (after the thermomix) was a little mini ice-cream scoop.  Using that is easy and I get equally shaped bikkies and chocolates.  Using the mini ice-cream scoop (and not skimping in the scoop) I got 68 bikkies!!!

In one batch, I accidentally added SR flour instead of plain :-(  But, although they SPREAD and they weren't quite as fudgy, they still worked ok, so if you do that don't throw the mixture out (as if you could afford to!!!)
My verdict?  They get our Tick of Yum!!! 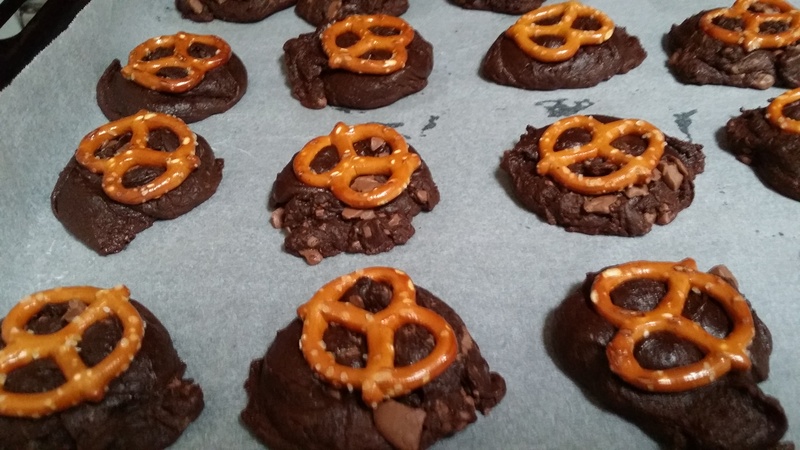