I think I'm turning into a bread nut LOL - I seem to LOVE, absolutely LOVE making it!!

I thought I would try brioche.  Easy to make, like all the doughs.  The dough isn't sticky and came cleanly out of the bowl.

I had to try something different (of course) while the brioche dough was doing it's doubling thing... I mixed

and pulverised on 9 for 6 seconds

Then I added 100g of brown sugar

A beautiful, not too sweet or nutty spread mmmmm!!

I divided the risen dough into 1/3ds.  One third I made into 6 small rolls and put some of the nut mixture on the top.

The 2nd third I rolled out thin into a rectangle, spread it with the mixture and then rolled it up.  I then cut it into 6 small pinwheels.  I put the nut mixture over a couple

The last third I rolled out into a rectangle.  Spread the mixture over it, folded into half, then rolled it out and did it again and then again. The mixture just got too slippery after that and although it was nice, I wouldn't bother with this next time.  I then cut them out and folded them in half - spreading the mixture over half of them.

HINT: after trying a bit of each - I would suggest that, although tasty, the mixture over the top is not necessary for the swirly ones.  They have enough of the mixture in it.  Besides, the excess runs to the bottom and makes the bottom of the scroll crispy - you don't want it too hard. 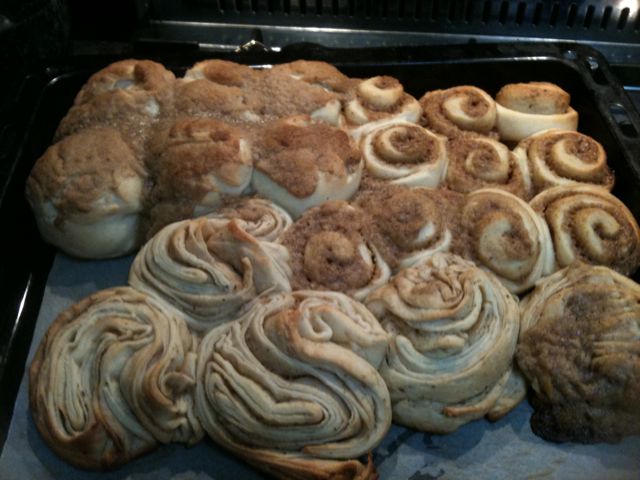 Categories: Breads, My own Recipes