I am really loving the new Basic Cookbook that comes with the new TM5 - but there are a few recipes I just HAD to think about.... then try the recipes just to make sure.  The first was the Brioche recipe and I have just posted about that.

First of all - Be aware that if you are using the chip it has slight discrepencies to what is in the cookbook - here is the information from Head Office...

What I noticed about the recipe straight away, was that for less base ingredients - the recipe calls for the same amount of salt as it did for the meat stock in the EDC - therefore the stock paste would be saltier.

So now I've made both of the new Meat Stock Concentrate recipes (beef and chicken) what do I think about this new recipe??  In short.....

FINAL VERDICT? I love it, but I think it is a touch too salty, I personally would cut the salt down to 120g (NOT any less!)
You might be asking yourself should YOU change the salt??  I can't answer that - the salt (as per the recipe) is STILL nearly half that of the same stock paste sold by Continental and therefore you ARE reducing your salt by making it as is!   I would perhaps recommend that you make it as per the recipe the very first time and then adjust the salt as needed the second time you make it.
Hints:
How long will it stay in the fridge?  Well... that DOES sort of depend on how you treat it to be honest.
In an absolutely perfect world with absolutely perfect procedures, you should get many months!  I put my stock into 250g jars - vaccum seal them and then put a "use by" date of 3-4 months on them once they are opened.  I am sure it'll go longer - especially with the extra salt in this recipe  - but just use your common sense.  BAsically though... if you are using the stock regularly, you will use it up well within the "use by" (I'd use a 250g jar in 6 weeks)  so that makes the question of how long it lasts moot!
The photos shows the larger 500g jar of beef stock to the left, with the 2x 250g jars of chicken stock to the right.  You'll notice that the paste is a lot drier than we're used to.  Better?  Don't think so, merely different. 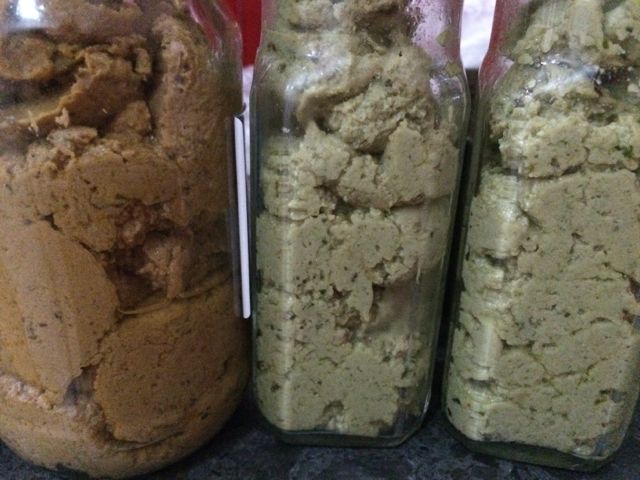