Last year, I posted a picture of a Brioche Santa face that looks amazing in the pictures.... but ended up looking like.... at best Cartoon Santa - at worst Demented Santa... when most people actually tried to make it.

So... the hunt fwas on or something easier BUT just as fancy looking!

I saw these pics on Pinterest and I wanted to know just HOW easy these were and didn't look at the instructions, merely at the pictures, and then made them.  in a word..... WOW... these looks great.  Not just for this festive season, but how nice would it be if you take something like this at ANY time!!??

First... the finished pics (NOT that I want to boast.... well.... maybe a little - I was THRILLED with how they turned out) 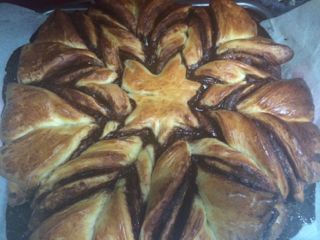 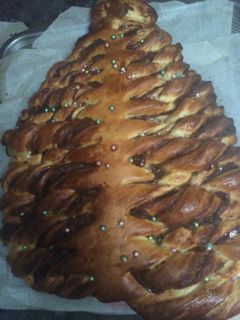 It all starts with a filling. I've used a cinnamon/butter/brown sugar mix along with some cocoa to make it dark and stand out. I've doubled the cinnamon filling from this recipe.  Some people use Nutella - of course the Thermomix version.  I think a lovely coffee and walnut version would be delicious too!!  Set it aside, scrape as much as you can out... but don't bother cleaning the bowl.

Then, you'll need to make a Brioche - make a good sized Brioche (the Brioche from the Everyday Cookbook, not the Basic Cookbook that comes with the TM5 - its too soft and too small.  I'll add a copy of the reicpe at the bottom of this page if you don't have it already.)

Roll one of the balls into the shape you want.  Obviously, triangular for the tree, circular for the star.  DON"T STRESS about getting it exact.  It is flexible and can be manipulated into shape!!  As for the Tree, I found it even better to trip to a sharp edge, then use the "bits" to make a star for the top.  If I had more room I'd have made a "trunk" too.

Cover the first shape (round or triangular) wth the filling, add another shape, cover with the rest of the filling and put the third shape on top.

As I said, don't worry about it being exact.  get it roughly right and then put it into the right shape like so..... 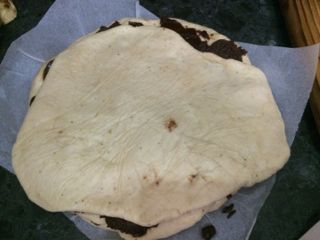 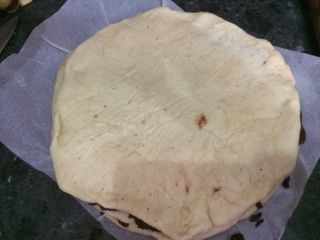 Then it is just a matter of getting one of the cut triangles and twisting it RIGHT twice.  Then the next one along LEFT twice - so that they "face" each other and will make a "star" with the filling.  Push it all into the right shape afterwards if you've got it all wonky. 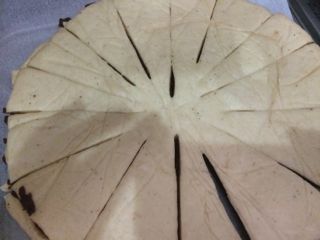 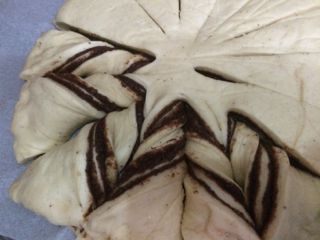 When you have finished brush the top of it with a mixture of beaten egg and milk.

Follow the basic premise of the star.  1 triangle, cover it with filling, another triangle, filling and then the top.

I cut the edges of the triangle to make it a little sharper.  Use the bits to make a star and/or the trunk.

Once again you need a little space in the middle where you are NOT going to cut... then just start cutting little strips like so 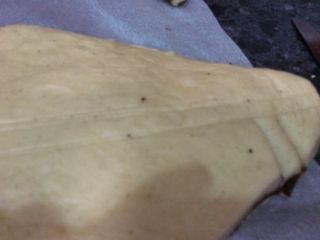 Then do the other side.  It is best if you get the cuts even 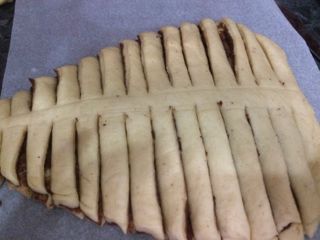 Because these are thinner it may seem like it'll be harder to twist, but not so.  LIFT the strips up and THEN twist.  It's ok to pull on them a bit if it makes it easier.  Twist THESE all the same way one side and back the other way the other side 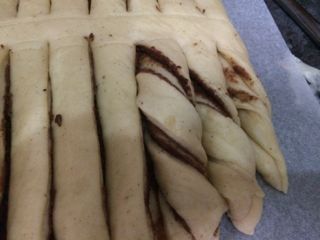 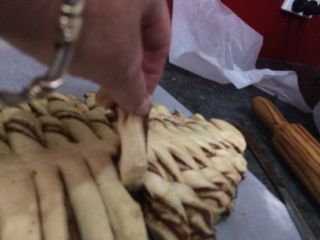 Then do the same thing.  Brush with beathen egg/milk mixture and add the Cashous (those edible ball bearing thingy's).  Make sure you let rise a little bit (15-20 minutes.  Then cold oven - switch on the oven, bake at 108oC fan forced (200 otherwise) for 20-25 minutes or until golden brown