Tough meat? How long to cook?

I have cooked the "cheaper" grades of meat a lot.... prior to Themomix.  Afterall, until I won the relationship lottery and met my most wonderful John... I was a single mum - what else could I afford!?

I have never liked the slow cookers... everything end up tasting the same - no matter what you put in it - veggies, meat.... they all tasted of one thing, no differentiation!  And way too mushy for my taste.

I used to cook my meat slowly on the stove (invariably having a crust on the bottom of the saucepan to soak off later) or in the oven (very hot on a warm day AND generally bubbled over and burnt on the outside of the casserole pot... for me to soak off later.

But... how is the tougher meat in the thermomix?  WILL it tenderise it?

Common sense said yes!  After all, to tenderise steak you bash the living daylights out of it with your hammer thing don't you?  Won't stirring the same meat, constantly, for 40-60 minutes do the same thing but is easier on the arms?

So, I set off to try.  I am not putting this recipe up because it is a "fruits of the pantry" type of meal... whatever I had there LOL

I made a thick sauce out of peanuts and garlic (minced int he thermomix), a couple of plums (ditto), a couple of small chillies, some soya sacue and a bit of beer (stoppering the rest in the bottle) - to a thick paste.

I cut up some largish chunks of skirt steak and marinated it in the sauce/paste for a couple of hours.  Looked pink (thanks to the plums... was a bit worried)

When I was ready, I chucked the meat and sauce/paste into the thermomix, added the rest of the bottle of beer and mixed 2 tbls of corn flour with 100g of water and added that too.  I had 1 and a half large mushies and chucked that in.. and a bit of dried onion (that I use for spice mixes) that I was putting into a container but the last bit didn't fit - so in the casserole it went..

Tender?  It was SO tender you'd think I had cooked it in the oven for hours!  It was already falling apart.  I would say that 45 minutes would have done it just fine and the last 5-10 minutes made it more into a ragu than a casserole.

Did the marinating help?  It certainly helped the taste.. the tenderising?  A little.  I would say that the rule of thumb might be marinate (with something acid like wine, beer, lemon juice, vinegar) and you can cut down your cooking time to 45 minutes for really tough meat.

No marinade... cooking for 60minutes will have your cheaper meat acting like scotch fillet!!

We had the meal with a fresh loaf of foccacia bread, sprinkled with garlic - rosemary and salt.... MMMMM! 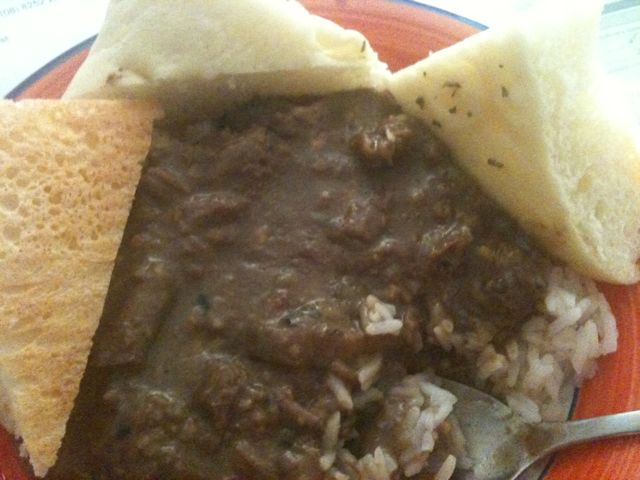 Categories: For your interest, Basics, HINTS